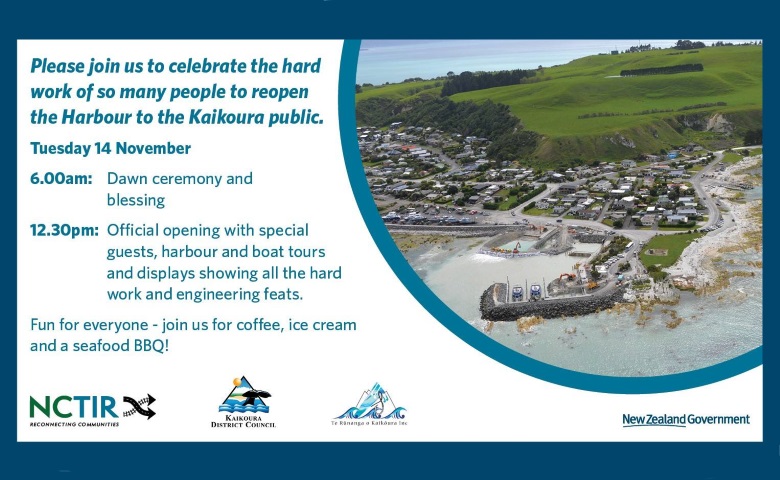 It’s now a year to the day since a massive earthquake, measuring 7.8 in magnitude, hit the whale watching town of Kaikoura.  The quake rattled North Canterbury just after midnight on the 14th November 2016  and was felt as far north as Wellington.  It lifted parts of the sea bed by up to 10 metres in places and caused huge landslides.  Large sections of the main road (SH1) that runs from Picton to Christchurch were blocked, as was the inland route, and the Coastal Pacific train line was closed.  For two weeks the town was completely cut off by road and rail.

Over one thousand tourists were left stranded and over the course of the next few days the navy and local helicopter firms were drafted in to help “rescue” them.  Motorhomes and rental cars were left abandoned and moved to a field north of Kaikoura until the roads re-opened.  At the time we had two clients in Kaikoura, who we swiftly helicoptered out.  Having colleagues on the ground at times like this is invaluable – thanks to the quick and efficient work of everyone in our Auckland office we were able to make sure this natural disaster had as minimal an impact as possible on our clients’ itineraries.

Since then Kaikoura has proved itself a resilient and robust place.  It wasn’t long before the whales , dolphins and seals that the town is famous for were once again spotted off the coastline.  It is still a haven for marine wildlife and Whale Watch Kaikoura, Seal Swim Kaikoura, Encounter Kaikoura and Wings over Whales are amongst the 93% of tourism attractions to have re-opened.  Our clients – the Fry family – were amongst the first to visit Kaikoura after the earthquake.  They were flown in by private charter in December, and made the local news by being on the first dolphin tour post quake.  This is what they reported back at the time –

“People must definitely come here.  As you said, it is a truly incredible experience just being part of helping them get back on their feet.”

Paul and Sally also both visited Kaikoura earlier this year, keen to support the town and intrigued to see the new coastline. Despite a few accessibility issues they found that much of the infrastructure in the town was undamaged and that it was very much open for business.

So what is the situation a year on?  There is no point denying that the earthquake has had a profound effect on the town and that it has been a difficult year, full of uncertainty, for those that live there.  Yet despite the destruction caused by the earthquake it has also sparked some opportunity.  The town is proud to boast the newest coastline and seabed in New Zealand and it is campaigning for UNESCO World  Heritage status in recognition of its geology, cultural history and wildlife.   Changes to the landscape have created a new 1km walk at low tide across and around the seabed at Point Kean seal colony, there’s a new surf beach along the Esplanade and a new sea kayak experience to “Hope Springs”.  Here you can see bubbles still emerging from the fissures in the seabed.  On top of this a new museum has opened and the new marina is due to open today.  A new 60km cycleway and walkway now also runs between Okiwi Bay and Mangamaunu.

Logistically speaking the biggest news is that SH1 north of Kaikoura and up to Picton is due to re-open, ahead of schedule, in a month’s time on the 15th December.  Visitors will then once again be able to reach Kaikoura a few short hours after getting off the InterIslander ferry from North Island.

Kaikoura remains a magical spot and we are keen to help anyone who wants to visit the town.  Do get in touch on +44 (0)1298 74040 or email us at [email protected] and we will help you with your itinerary.