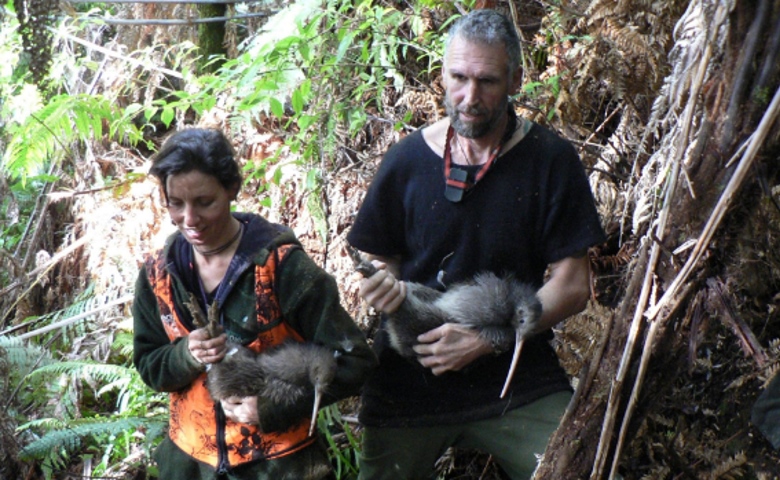 It’s the stuff of films – two lovers on the run from scientists who want to capture them to study their DNA!

Shirl, a lightly coloured kiwi who scientists believe may have rare DNA

This is the real life tale of Trev and Shirl, two kiwis making their bid for freedom in the Purangi Wildlife Sanctuary in East Taranaki.  After evading capture three times the pair are thought to be hiding out around their burrow, at an unknown location surrounded by cliffs and bluffs.

Their adventure began after their photo was taken during their annual health check and sent to the Department of Conservation for assessment.  The kiwis were then released back into the bush, just before the DOC put in a desperate call to get Shirl back.  They believe she may have the DNA of the little spotted kiwi, which is extinct on the mainland. There’s a possibility she could even be a new species.

Little spotted kiwi are extremely rare.  There are only thought to be around 1,600 of them left and most of these now live on island sanctuaries around New Zealand.

To find Shirl however searchers will have to track down Trev as he is the one wearing the radio-transmitter.   Male kiwis wear the transmitters as they sit on the eggs and so are usually the ones that need to be found.  The birds only have one mate at a time and partnerships have been known to last decades, so it’s likely if searchers find Trev they’ll find them both. Karen Schumacher from the Purangi Wildlife Sanctuary says they have managed to get within 20 metres of Trev before he vanished.  They’ve now called off the search for the time being as they’re worried if they continue their efforts Trev will get fed up and “divorce” Shirl.

New Zealand is home to a staggering number of rare endemic birds many of which, like the kiwi, are flightless and under threat from introduced predators like rats and stoats.  We are proud to support conservation initiatives in the country like those run by the  Wairaurahiri jetboat trip in Fiordland, and at Farewell Spit.

If you would like to find out more about conservation efforts in New Zealand take a look at our Predator Free NZ itinerary or get in touch on +44 (0)1298 74040 or email [email protected].